Please select one of the items below to narrow your search by Subject.

Please select one of the items below to narrow your search by Related People.

Please select one of the items below to narrow your search by Described Entity.

2) WW I Soldier
Format:
Image
A soldier in uniform, including puttees, in a studio setting. He is seated, leaning on the corner of a table with his right hand, his left on his left knee. His right foot is cocked behind his left. He is wearing a ring on the little finger of his left hand. The embossed photographer's mark is in the lower right hand corner of the postcard. The card is not addressed or stamped and the markings are French: "Carte Postale, Correspondance, Adresse"...
More Info

4) Bill Flynn
Format:
Image
Billy Flynn on his way to join the Army in 1918. Taken on the Iron Bridge.
More Info

6) Ed Bratton
Format:
Image
Ed Bratton, on the right, with an unidentified friend, standing in front of barracks, 1917-1919. "They went into the Army from Eagle County. The Bratton Family lived at Taponas in Routt County, but Ed and Frank Bratton were working in Eagle County when they enlisted. As a result, they were not listed in the published book of Routt County WWI veterans." [According to Gertrude Bratton Wilson]
More Info

10) Bill McHatton
Format:
Image
Bill McHatton, in uniform, at Glenwood Springs in 1918. He was on furlough.
More Info 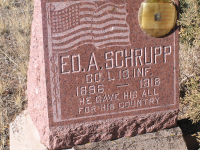 17) Laying a mine field
Format:
Image
Photo postcard in the Bearden album of Germans laying a mine field in Leuven, 1915. Leuven is the capital of the province of Flemish Brabant in the Flemish Region of Belgium.
More Info 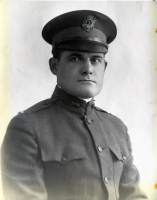