Please select one of the items below to narrow your search by Subject.

1) State Bridge
Format:
Image
By June of 1946 when this picture was taken, the bridge's "age was beginning to show and some weak places had developed and there was talk of condemnation, it being unsafe for heavy loads. So it was no great surprise to anyone when truck driver Jim Jardy hauling a heavy bulldozer mounted on a low boy found one of those weak places and dropped through. Jardy and Bernard Ginther, operator of the bulldozer, were extremely thankful that they did not go...
More Info

2) State Bridge collapse
Format:
Image
"Twice, during its useful years, sections of the bridge collapsed, once in 1929 and again in June of 1946 when this picture was taken. By then its age was beginning to show and some weak places had developed and there was talk of condemnation, it being unsafe for heavy loads. So it was no great surprise to anyone when truck driver Jim Jardy hauling a heavy bulldozer mounted on a low boy found one of those weak places and dropped through. Jardy and...
More Info

6) Bill Flynn
Format:
Image
Billy Flynn on his way to join the Army in 1918. Taken on the Iron Bridge.
More Info

8) Bridge Building
Format:
Image
Railroad employees building a bridge. Railroad ties and building materials are visible in the foreground. The inscription reads: "Building Turkey Creek Bridge" which raises some questions about accuracy given that Turkey Creek is at Red Cliff and this photo is identified as Kent.
More Info

9) McCoy Hotel
Format:
Image
"A look at the McCoy Hotel from the west bank of Rock Creek in 1916. If the bridge was only able to talk, think of the many interesting stories it could tell about the many travelers that passed over it between Wolcott and Routt County. Flood waters took it out twice, in 1952 when the King Mountain Reservoir dam gave way and again when high water took it out in 1962. After that it was never replaced." -- McCoy Memoirs, p.95. [Title supplied from...
More Info

10) Wolcott
Format:
Image
The concrete bridge at Wolcott, at center, over the Eagle River. The bridge was built in 1916. Railroad tracks cut through the photo, with the Wolcott community at center.
More Info

11) Bridge over Colorado River at Dotsero
Format:
Image
First bridge over the Colorado River (then the Grand River) at Dotsero. The bridge was probably built by Mr. Yost or Mr. Stewart. [Title supplied from catalog prepared by the Eagle County Historical Society.]
More Info

12) Concrete arch bridge
Format:
Image
Building the concrete arch bridge at Wolcott in 1917. The Pueblo Bridge Company began the project in 1916, on State Highway 131, crossing the Eagle River. The bridge has since been replaced. It is a good example of the Luten arch, patented by Indianapolis enginerr Daniel B. Luten in 1905. Luten arches, which resemble a horseshoe, quickly became the most widely built concrete arch in America. -- Spanning Generations, p. 37
More Info

13) Catamount Bridge
Format:
Image
"The Catamount Bridge, looking east, showing the river, river road and railroad with Yarmony Mountain in the right background. The bridge, built in 1909 stood up well until 1951 when a loaded soft drink truck found a weak place and broke through. Fortunately no one was hurt, but the bridge was out about ten days." -- McCoy Memoirs p.18 [Title supplied from catalog prepared by the Eagle County Historical Society.]
More Info

15) Mildred Howard on Dot, the horse
Format:
Image
Mildred Bailey wearing riding attire, seated on Dot the horse. They are standing on either the Kroelling or Avon Bridge over the Eagle River. Buildings in background. Used on p. 53 of Beaver Creek: the first one hundred years, by June Simonton. [Title supplied from catalog prepared by the Eagle County Historical Society.]
More Info

16) Frying Pan River and the Roaring Fork River near Basalt
Format:
Image
1930s: The confluence of the Frying Pan and the Roaring Fork Rivers near Basalt, Colorado. There are two people standing in the right foreground and a bridge in the background with houses behind it. Some snow on the ground. [Title supplied from catalog prepared by the Eagle County Historical Society.]
More Info 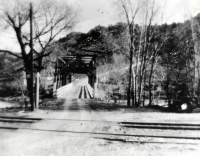 19) State Bridge
Format:
Image
Looking across State Bridge from the north side of the Colorado River. [Title supplied from catalog prepared by the Eagle County Historical Society.]
More Info

20) Edwards, Colorado
Format:
Image
The Eagle River at Edwards [Wilmore stop]. Lettuce shed next to the railroad with the old water tank in the background. Benny Klatt's home and small store on Highway 6. Benny Klatt was killed by his brother-in-law, William Wellington, over the ownership of the cabin in which Wellington lived.
More Info
Search Tools:   Get RSS Feed   Email this Search   Save Search   Export To Excel
v. 2022.01.1